It's been a trying couple of months but I feel somewhat back on my path and I'm feeling focused and confident about Canoa.

The comp in Arizona was as layed back as ever and I was able to sit back and enjoy a few years of work instead of organizing and flying the event, thanks to Jamie.

On the way to Arizona looking out over southern New Mexico. 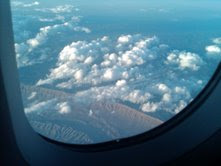 I flew a prototype glider produced in September that had the sweetest handling of any T-2 so far. Glide performance seemed intact and I won day 2 on a blazing downwind day into the saguaro national monument area. Distraction was all it took for me to fall down on day 4 and no amount of flying was going to get me back on the podium. All that was left was to sit back and enjoy round after round of black russians in the hot tub.

The week after AZ was spent working on the latest prototype at the factory. Along with the new sail mods, I got a bunch of drag reducing tweaks done to my harness and peripheral gear so it was time well spent. Steve and I got to rap about gliders and cool aero ideas and now I'm putting some of that to the test with practical modifications for next week's race. The new wing looks HOT..

Spotted this item hanging in the airport terminal in Santa Ana on the way to the factory... 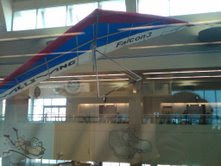 From LAX, I flew straight down to Brasil for a two week visit with Manuela. We visited Paraguay, Argentina, and all of the local attractions and had a great time.. it was a real boost of positive energy spending time with her. I skipped the comp that was happening in Carmo do Rio Claro, but I will be sure to catch the next one. It's one of the few sites I haven't seen down there but it sounds like last week's comp suffered some pretty poor weather so hopefully next season is better. Here's a shot before launching on task 6, which was eventually cancelled with a cu-nim on course. Looks amazing. 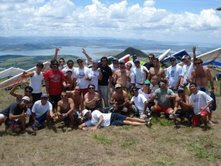 Pictures of this year's Canoa mods will be up soon (a step up from last year's mods, I'm fully aero this year).
Here is a sneak peak of a camera soon available from Flytec usa... I will be using it along with a gopro hero to capture various angles of glider mounted HD video of the race course next week so stay tuned. 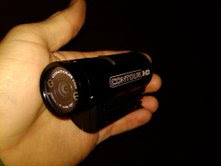 And for the conclusion of my circuit, I ended up with a layover in Newark where I had hoped to go run around NYC for a few hours but got this instead: 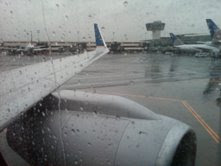 That 757 has got to be the sweetest, slowest landing airliner I've ever been in.
Posted by Dustin Martin at 4:08 PM