Raffle Update: Jonothan Dietch's pod is cocooned in its neoprene bag after getting a custom paint and clear coat job this week and the custom Wills litestream aluminum bar mount is underway and slated for delivery.

Larry Feringa is the latest winner of the super pimpin hg lighters quiver...here he is - 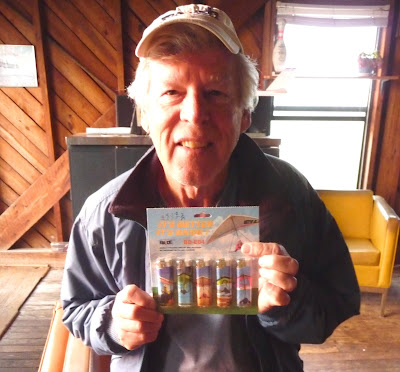 Just wrapped up the Arizona 4 day XC clinic that was curiously attended only by out of towners. Don, Eric, Bruce, and Jeff all came out for 3 days of flying and one day of wind.

Day one we got the aerotowing equipment sorted and had a quick fly in the tail end of a cold front. Short, sweet ground school was followed by some routed planning for day two.

Sunday, Day two had moderate winds pushing us straight to our goal 57 optimistic miles away at Marana airport. After an hour of route discussion, gps programming, and dodging dust devils, we were up and on our way.

Eric, who does not like right turns, circled left and drifted downwind almost continuously turning for his personal best flight of approximately 14 miles.
The rest of us continued on southeast and were temporarily separated by the Eloy jumpzone as we split on both sides of the airport.

Bruce made the first of many, many low saves of the clinic on the east side, while Don, Jeff, and I stayed high on the west side. Don arrived a couple hundred feet too low at the next dust devil while Jeff and I corked up in it.

Next order of business was to go back to Bruce and attempt to pull him through the last of the wet, green farm areas. This went the way of many great plans and after one long smooth glide he was down in the desert and I was spinning up from 300 feet over I-10 to reconnect with the last of the boys.

Jeff and I continued on over Picacho Peak, both topping 7500 feet as we straddled the highway under our own separate clouds, racing for final glide height. Jeff had me by a few hundred but declined a 12:1 glide preferring the safety of a 9:1. We alighted in a 15mph breeze at the Marana jump zone after a 3 hour journey.

Day 3, had the lightest winds of all which allowed easy gaggling over Phoenix Regional as we waited for the entire crew to get towed up. Conditions were typical high pressure Santa Cruz Flats: weak, broken 200's up to 6K. Everyone did well to stick together and stay high. Goal was again set at Marana due to inversions over the farms to the west and a NNW wind.

Some light herding was required for a bit of the wanderers but in the end everyone made it past Francisco Grande resort. Unfortunately a wide band of high cirrus swept by briefly and decked the lowest of the pilots, Eric and Bruce. Eric was still able to best the first day's flight for a new personal record of 16 miles while Bruce was able to extend his record for the most time spent scratching under 500 feet of anyone I have ever seen. Both landed in classic Flats baked dirt terrain south of Francisco for an easy retrieve.

After giving me shit for a scratchy microphone (that I fixed before our first XC flight together), Don was high and ahead doing well, except that his radio was not working. After realizing the situation, I decided to resort to hand signals and stayed as close as possible so I could give him the "I see lift ahead" or We go NOW" sign language. One time I gave him the "stop drooling over your vario and start looking around" series of hand signs, but I think it was lost in the thin air at altitude.

We scratched to stay high while the shade passed and once it got good we went to high gear with Jeff underneath making a clinic student sandwich as we carried Don over some desolate terrain north of the Silverbell mountains and on to Picacho Peak.

Don made one impressive low save after another, to the point that he sluffed off Jeff and it was just the two of us scratching along in the next shade band. One very small mistake down low decked him finally at 36 miles, for his personal best distance and the end to a nice yet weather abbreviated clinic.

I half heartedly attempted a return to Francisco after making a tour of Picacho Peak at 8 grand, but shade and 5 hour neck put me down near Eloy. After 9 hours on the T2 154, I am suitably impressed by its handling and floaty qualities, but can't wait to get back on my 144 sports car.
Posted by Dustin Martin at 2:30 PM

I don't have those problems any more.

I was wondering what happened to my SHGA homies, Don & Eric. This gets linked on the club forum shortly. hehe.