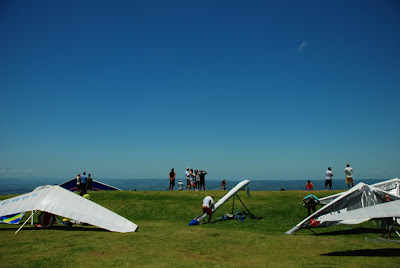 Since three days were cancelled during the meet, this fourth task was the last. Goal was called just past the village of Montenegro and south of the highway out in the farm fields a few kilometers to avoid the tree farms near the town. Total distance was 62km pretty much downwind. 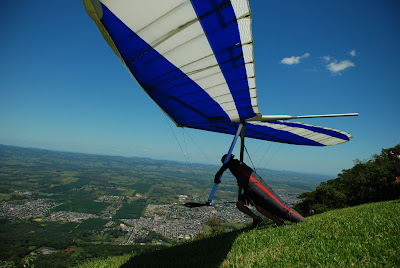 Clouds were forming well and were growing large by the time the start opened. The gaggle went left of courseline while I veered right to a small mountain chain. After a minute or so the entire gaggle had slowly decided to follow. Thinking the day was as good as it looked, I passed up the first thermal I hit before the ridge, sure that the spine would be putting out better. Fifteen minutes later, the entire gaggle was at base and I was still scratching at ridge height wondering what had happened. 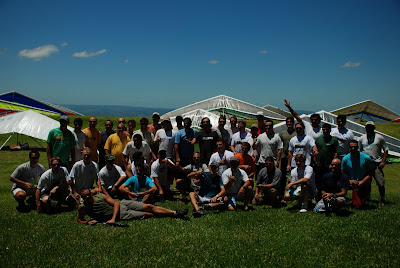 With such a short task, I resigned to the fact that I had fallen to an unrecoverable position and the best thing I could do was just make it in. After Novo Hamburgo, a huge thick cloudstreet promised an opportunity to speed up, but after running its entire length without a beep I glided out into the blue dejected. I could see flashes of sun on the wings of the lead gaggle several climbs ahead and that kept me plugging along.

By chance I looked over to the side while gliding and spotted a vulture cruising from left to right. I looked in the direction of his glide and spotted a huge gaggle of birds above and 1/2 a km over. I quickly turned off course and locked into the best thermal I had seen all day at about 3 m/s. After getting to base height out in the blue in that lucky climb I was in good position to hop a couple clouds in front, and after getting a couple more decent climbs I was surprised to see that the leaders hadn't done so well on that run, and were in front but grovelling low. It was with a huge smile that I glided into the top of the gaggle that had eluded me for so long.

Conditions had weakened over the rice fields and I felt it was time to move on, even if down low. Marcelo Ferro was running wing man and we were able to make a break away while Dorival, Monex, and the others hung back cautiously. Connecting to the mountain chain just past Montenegro, we connected to a decent climb under some wispies while the rest of the gaggle sputtered below. Final glide altitude came and went, and after getting some insurance height, I led out and upwind of course to the left. I got a slightly better line than Ferro and decided to slow down a bit thinking I had the day won easily. Three to four miles out from goal I just happened to look up to my right and out of nowhere, there is another T2! I hadn't seen another glider in front since the breakaway but it looked like he had me beat. I gave it a shot on the final dive, but he simply had me by a little too much and took the day by a few seconds. Turns out it was Ze Gala, winning the day after flying out in front and alone the entire way. Three out of the four comp days went to a T2, while the winner on his Litespeed was just too consistent for all of us. Ferro boated in a distant third, plenty to take the meet.

Here is an interesting launch sequence that turned out alright.. 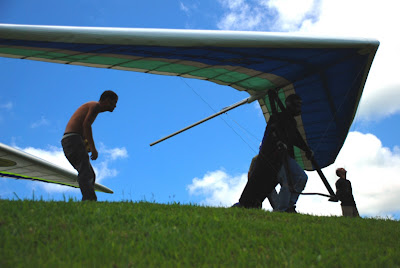 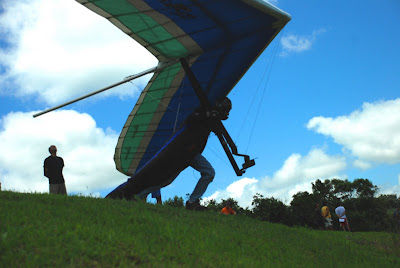 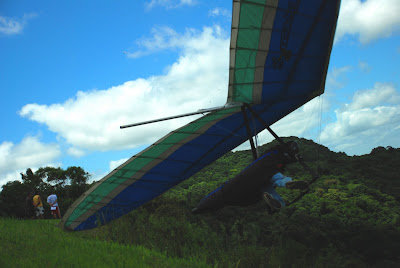 Photos Manuela Sanches
Posted by Dustin Martin at 9:58 AM

From all launches my dad had to be the one that almost crashed...while I was taking pictures. Jesus!