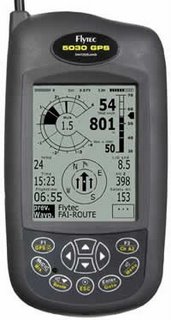 I was so lazy and so stubborn to not upgrade years ago. I have suffered the failures and disappointments of my gps for years of comps and now after this last race I feel even worse for all the lost points and lost standings that I can only blame on my own inaction.

This thing is so brainless and so perfected. A friggin turnpoint slayer! I think it saved me about 6 seconds plus per turnpoint and start cylinder. That's 24 seconds per day at Canoa. Seventy two seconds in the race total. I wouldn't just lose first place for an equivalent performance...I would be in third! I remember taking the turns last year gps 12 style (one one thousand, two one thousand, three....). More than a couple times I would arrive ahead of Kevy and whip my 180 several seconds after him and get to see his keel for the rest of the race. What was I thinking???

The last day's race start was a true illustration of this instrument's time saving..you have to time the glide from the main ridge to the start cylinder-it's about 3m40sec more or less. The last day I was determined to ace it and save a few seconds more. During the last ten seconds I realized I was going to be too early so I began to slow down....but time began to slow with me it seemed. As the countdown clock fell to 00:00:00, I was full vg, banked up, and stalled to avoid tagging the cylinder early. Luck was with me and I was late by a hair and heard the tone right before my glider half-spun and I dropped right onto courseline. HAHAHAHAH
Posted by Dustin Martin at 4:34 PM