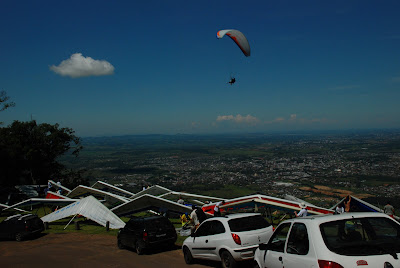 Sapiranga is in the most southern state of Brazil, just north from Porto Alegre and less than 50 miles from the coast. I just got back from a 7 day competition there, the first of a dozen or so on the Brazilian circuit this year. Even after getting only one flyable day last year in the same spot, I was keen to return after running a sweet triangle while watching the seabreeze convergence almost underneath me at times. 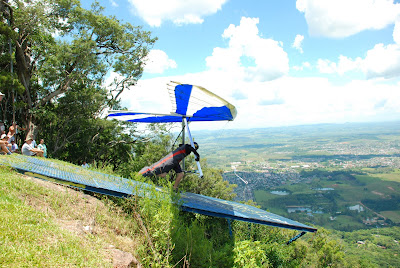 Day 1 saw a sky full of cumulus at about 5500 feet and slightly cross right launch conditions, but with 60,000 sq feet of grass and a concrete ramp, everyone got off in minutes. The task was 70km with 3 turnpoints and goal at a roundabout on the coastal plain just beyond the last hills of the region.

Once on course, at the second turnpoint I jumped ahead by gliding on courseline to the next turn, while the gaggle went about 45 degrees to the left. They obviously knew something I didn't but it looked like there was a cloud on the turnpoint itself so I went for it. The wind started to change and locating the turnpoint and the direction to goal was confusing with the huge crab angles. After the turn, the gaggle again went left while I glided on course.

The cloud they went to was awesome but I couldn't stand going downwind of course in a 30km/hr straight crosswind. Lucky or not, I ended up taking the final climb about 10 minutes in front of the gaggle and left at a 14:1 angle. My glide was netting me about 12:1 so I climbed a bit under the next cloud just to be sure. The glide after that was getting me about 10:1 but when I glided under a great cloud with a solid 6 up, I decided to keep on going. The wind had clocked during the flight from tail to quartering right tail, to cross, to quarter right headwind, and now was straight in my face at 30km/hr. I'm not sure why I didn't recongnize that this was a seabreeze or didn't want to accept it, but I continued on my final getting hammered into a crevasse in the rotor of some 600 foot hills. It was only when I was 50 feet shy of clearing the crest that I finally turned around and ran back down course at 800 feet looking for a save. I was a couple km short of goal at that point and only needed another 100 feet in that last climb to win by 10 minutes. Got a little greedy and ended up having to glide 10km away from goal to take a climb.

Came in 10th, 15 minutes behind the winner. Andre, Nene, Maskara, and most of the rest of the leaders had landed in the goal field but unfortunately all were short of the line by a few hundred meters due to the ripping seabreeze pushing through. So the winning group came from the late second gaggle, which became a theme over the next few days. 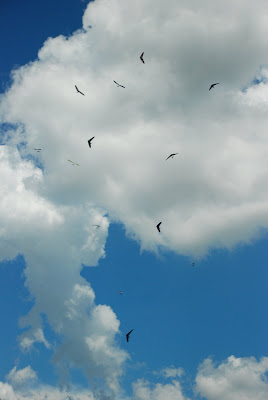 All photos by Manuela Sanches.
Posted by Dustin Martin at 4:24 AM