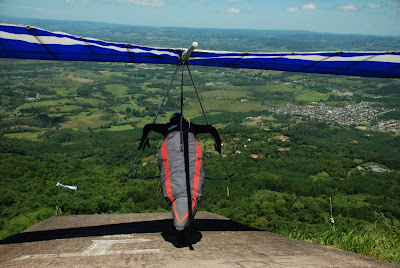 19 January we got up the hill to slightly cross and brisk winds and had to use the southeast launch. They say that's the better launch but they both look like a couple acres of manicured golf green to me. 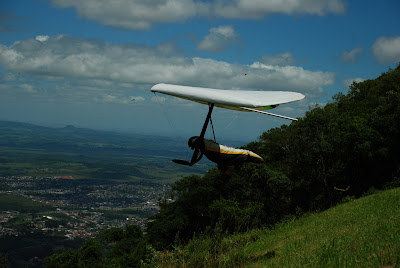 A task of 115km was called to the west. After a quick ride to cloudbase in front of launch, we headed out in a dense pack. Progress to Novo Hamburgo was quick if low. Thermals there were unremarkable but most pilots made it through.

Around this time, 2 pilots landed at an airport on courseline right under me. They were held captive for a couple hours, and it turns out we were all flying through- or over airspace that is our equivalent of a restricted area. Protests followed but were dropped later.

Just after the town of Novo Hamburgo, an extremely sweet looking cloud had formed and I decided to push a little harder to see if I could shake my bottom of the gaggle position. It worked out and I ended up in front for about half an hour, but unfortunately I couldn't back off a gear and let the gaggle work for me and I ended up low at the turnpoint 30km short of goal after a series of ridiculous decisions.

I was 1000 feet above a bunch of wet rice fields when the lead gaggle rounded the turnpoint just behind and above me and got a climb under a nice cloud that had drifted in from the southeast. If I had known there climb was as shitty as mine, I wouldn't have blazed off at 1500 feet over the wetlands. So my stupid move netted me a landing at a farm just off the highway short of goal. It seemed like an eternity before the gaggle stopped circling and headed off. Almost all made goal after that. 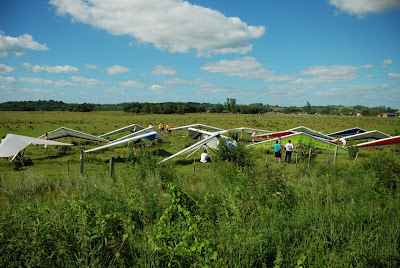 I hadn't recognized the change in the state of thermals after the turnpoint when I should have. I learned later that it is common knowledge for the area I landed in. The pressure was off now as I had thrown the comp so the next days I was able to take some chances that paid off. Day 2 results- http://geocities.yahoo.com.br/ofiaes3/sap09prova4brasil.pdf

All photos by Manuela Sanches
Posted by Dustin Martin at 5:21 AM