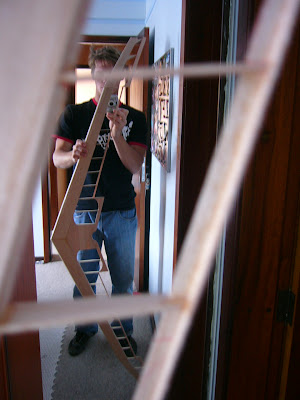 It's about 2 meters span. 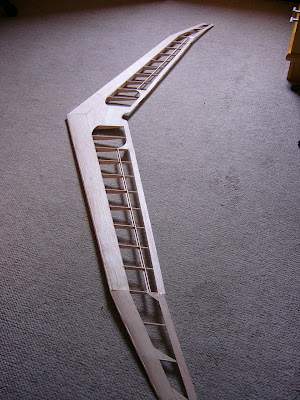 Full length D-tube, flat center section, a bit of dihedral on the tips. 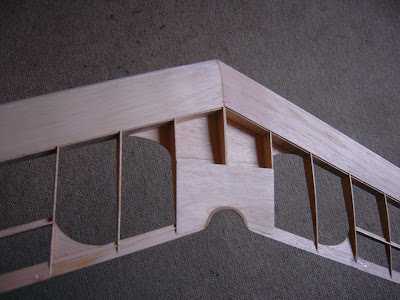 Here is the top view, left out the last center sheet until I install the radio.

After I left Brasilia and sold my wing two weeks ago, I picked up where I left off on a project started in June. My friend Matt had mentioned an airfoil plotting program he was using to make templates for foam core cutting and I took a look at it one day. It not only plots airfoils, but it allows you to basically build the entire wing in 3D with all the cutouts for spars, webs, sheeting, te, le, etc. I just started screwing around with it until I had this sweet looking planform and I just had to build it.

Well the *free* trial of compufoil is sort of bs, as you will find the moment you click print. One sheet of ribs will print on the 100% scale, while the next is purposely skewed to prevent you from getting anything useful, especially on a tapered wing like this where every rib is different. It took quite a bit of time, but after a lot of print screen, save, print screen, resize, ......I finally manipulated the second page to print on the correct scale.

And that was the beginning: two sheets of paper with 15 airfoils for each wing half. I used airfoils that were in the compufoil database, RG15 at the root, transtioning to SD8000 at the tip. RG 15 is fairly common for thermal models, and is not at all pitch stable for a flying wing. SD 8000 is a symmetrical stabilizer airfoil, pitch neutral. I think I stretched them a little to make a thinner profile also. So the wing's stability will come entirely from twist, zero reflex. The wing was built flat but the twist will be added with the covering. My last flying wing was based on twist as well, so I should be a little closer with my twist guess this time.

Some of the simplest materials that are so easy to acquire in the states can be difficult or impossible to find here. First, at the hobby shop, which is actually a really decent store, I was only able to find balsa, no hardwood, and the balsa was only of the worst quality. It took an hour of digging through every sheet they had to pick a dozen pieces that would work. Second, I still don't know where to find epoxy. Although I know it's around, I just haven't worked out where it is sold. Number 11 Xacto blades...nope. My favorite building board, those suspended ceiling tiles used commonly in office buildings....not a chance. And finally, wax paper.....I would pay 50 bucks for a roll of wax paper right now. So the wing was built on a sheet of white styrofoam with a layer of some poly-whatever that was non stick and see through and held in place by seam pins...no T pins available. And, surprisingly it all worked great. Actually the total cost of materials to date is around R$55. $30 usd. Pretty incredible. So the entire wing has been built with only balsa and CA, not a stick of hardwood or a drop of epoxy. You get pretty creative trying to make things strong enough when you're limited. The D tube is key, but the vertical grain, full span shear webs do all the work that hardwood spars would have.

I plan on using 2 HS 56 servos in it, hitec feather receiver, and a tiny battery pack. I will ebay them back in AZ and bring them with me next time around. There are some beautiful places around here to huck this thing so it will be nice when it is finished.